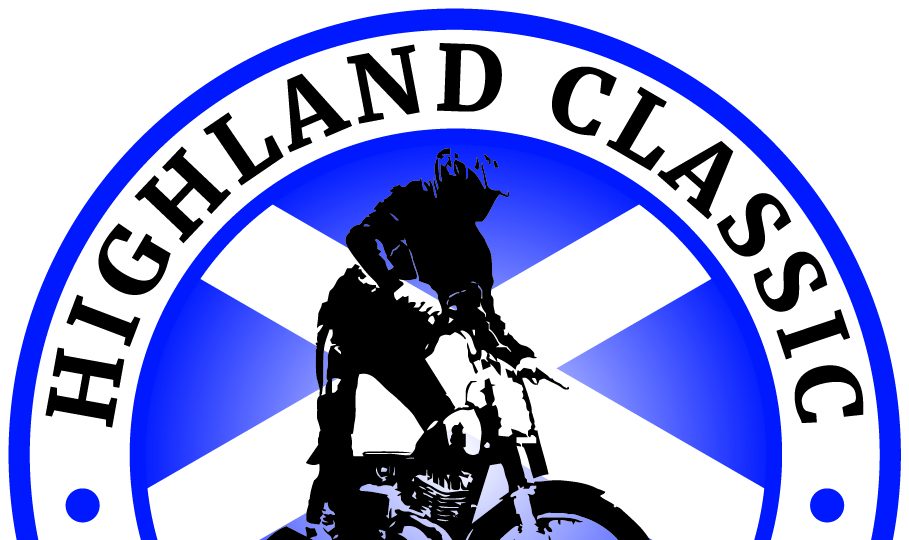 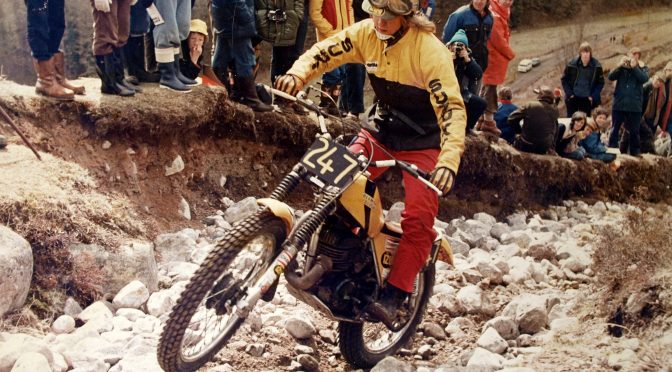 The 2023 Highland Classic will be The Suzuki Edition, and the committee of Inverness & District MCC have agreed that the release time for the online entries will now be 20:00 (8pm GMT) on Wednesday, February 1st 2023.

This is a departure from the normal midnight timescale as there is now no longer an advantage for local entrants, now that we use an online system. This makes it fair for all without having to wait up until midnight to download or complete an entry form.

It will however continue to be acceptance on a ‘First come, first served’ basis. 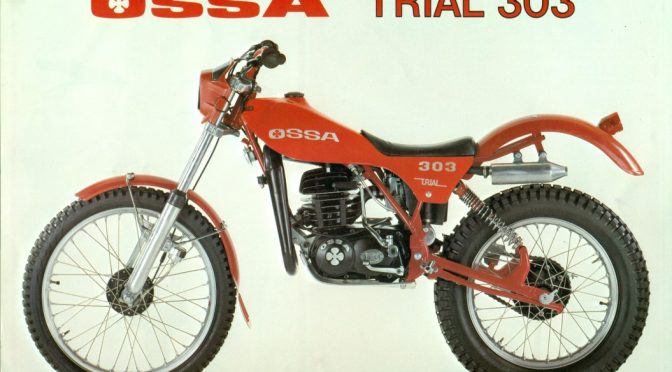 In accordance with FIM regulations for overseas riders taking part in this years’ Highland Classic, the IMN and EMN numbers for 2022 are: 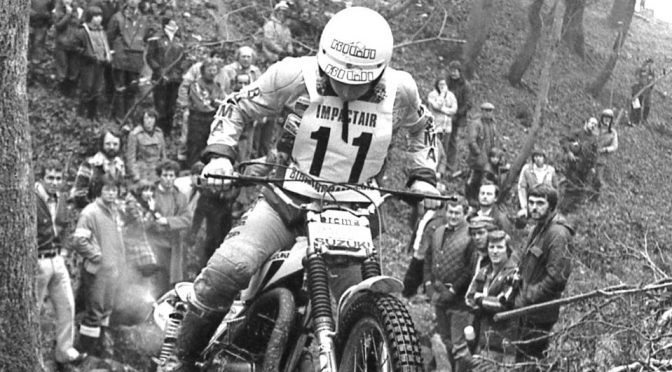 Plans are always on the move at IDMCC Ltd, especially for the annual Highland Classic Two Day Trial and we announce that the event theme will be: THE SUZUKI EDITION.

There is already a section on the website for information to be released for the 2023 trial which will be held on 10/11 June at Alvie Estate.

As the saying goes, watch this space HERE 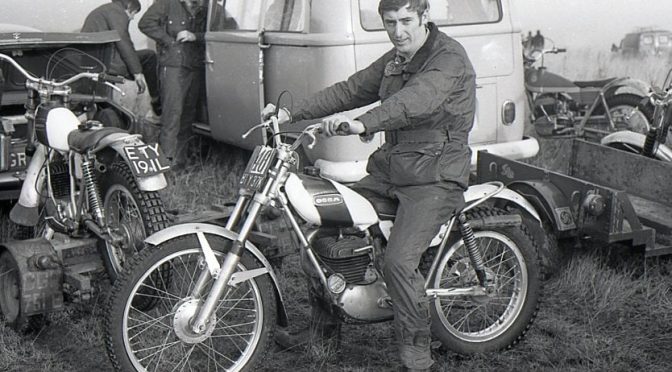 To those who secured an entry for the 2022 Ossa Edition of the Highland Classic: ‘well done’, you obviously have fast fingers to get your online form into the system!

Now comes the time to pay the entry fee and confirm your intention to compete on the marvellous Alvie Estate in June.

We have already received 143 entry fees so far, that leaves around 50+ still to pay withing the ten day payment period which expires on Monday 14th February as all successful entrants have been e-mailed.

Failure to pay or to make contact with the Entries Secretary, will mean the entry option will go to the next on the Reserve’s List.

Don’t be late, you got this far, don’t mess it up by being forgetful!

Following the successful opening of entries for the 2022 and a full house achieved very shortly thereafter, the time has come for the Reserve List to be drawn up for those that were unsuccessful at the first stage.

Annually, for whatever reason, entrants may wish to withdraw their entry and the reserves allow replacement and the opportunity to refund withdrawing rider’s entry fees as close to the event as is possible. The committee reserve the right to withhold entry fees, but normally are able to use discression, particularly if a reserve entry can be allocated.

This year we have gone a step further my managing the ‘Reserve List’ online on this website, thus avoiding the need for reserve entrants contacting the organisers for an update.

All reserve entrants need to do, is go the the ‘Reserve List’ on this website and you can then see who is at the top of the list and how far away you are for an entry (if these become available). 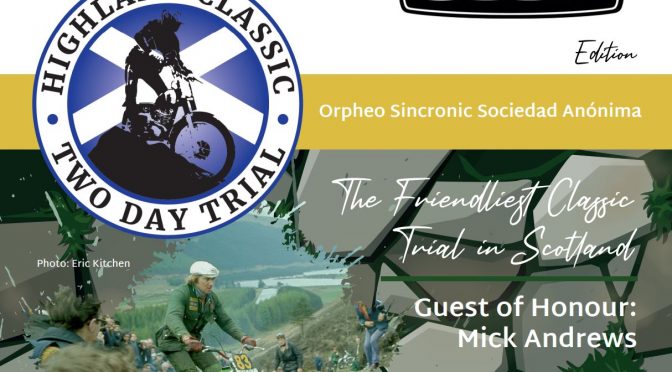 With the entries opening at one minute passed midnight on 1st February, there was a frenzy of activity across the nation to get the online entry form in to the Inverness & District portal!

And the end result was a full entry ‘SOLD OUT’ by nine minutes after the hour, that equates to eight minutes flat, all the available spaces filled!

It was evident that some entrant’s used a friend to submit their entry, but it takes at least three minutes to complete an online form and submit it, many were disapointed as they were just too late. At least one group of three friends lost out at just 10 minutes passed the hour, with only one of their group gaining an entry.

However, IDMCC Entry Secretary, John Moffat said: “All is not lost, we usually have a 10% drop out rate pre trial which can equate to around 20+ entries becoming available over the next 4 months. It was evident that groups of riding buddies were relying on one of their number putting in all their entries, that was noticeable and it isn’t the best way to submit as it can cause errors and entrants simply getting their form submitted too late. Individuals should complete their own form, welcome to the world of online entries, you snooze, you lose!”

The online entry is a vast improvement over the former ‘paper-based’ entry form method when entrants would travel many miles to hand deliver their entry to beat the post, and that became more of a chore in the past few years as the event has become more and more popular.

300 applications have been received for the 200 spaces at the 2022 Ossa Edition of the Highland Classic. 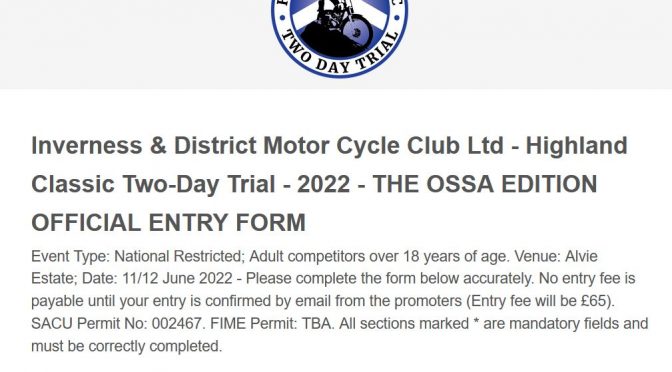 Entry Form for the 2022 Highland Classic is now available: 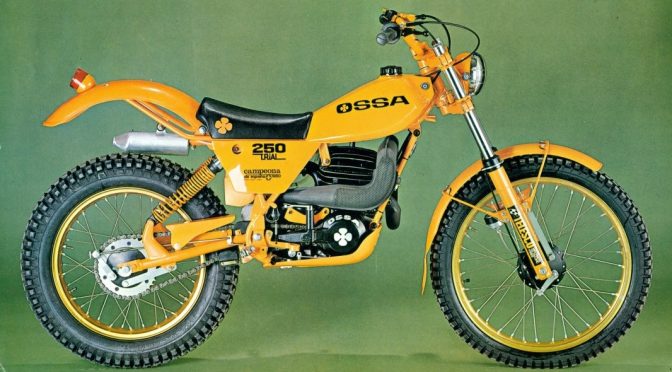 As well as our main ‘Trial Partners’ we also have ‘Trial Sponsors’ who support the 2022 Highland Classic Two-Day Trial. 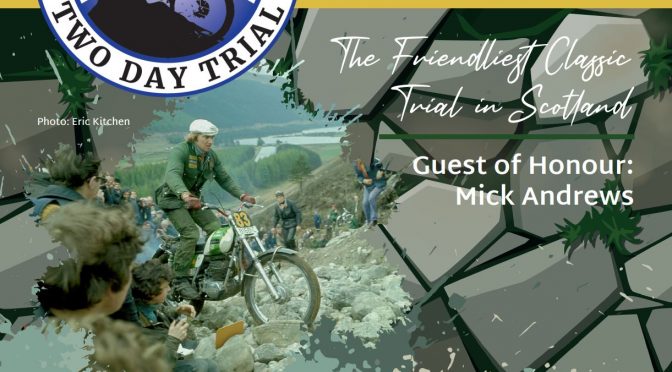 The Highland Classic official programme is a feature of the event and there are now advertising space available for organisations and companies at very low prices. 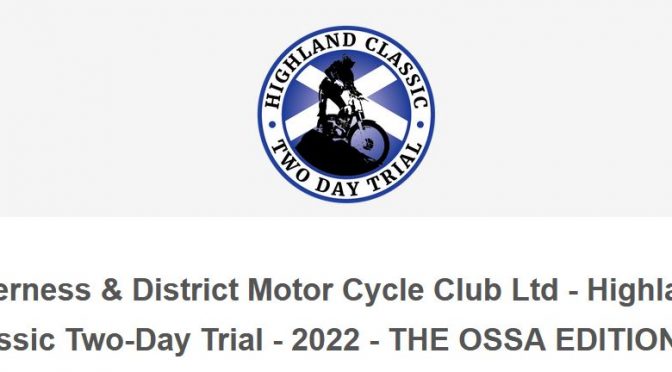 In preparation for the entry form release on 1st February, the IDMCC Ltd, promoters of the Highland Classic Two Day to be held on 12/13 June 2022, have released the regulations for the forthcoming event.

Prospective entrants are encouraged to download the regulations which give important information prior to entering the event itself.

Entry Forms will be available online from 00:00 on Tuesday, 1st February 2022. The entry fee of £65.00 will be payable when the entry is confirmed by the promoters and must be paid no later than 15th March 2022.