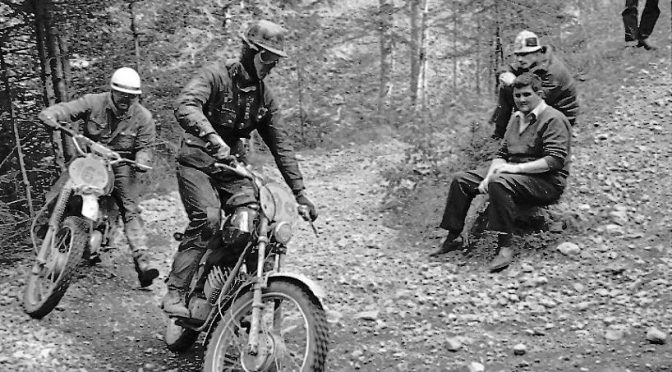 Each year since his death in March 2017, the Highland Classic Two-Day Trial has awarded the ‘Derek J. Edgar Trophy’ for the oldest finisher in the event.

The trophy was gifted to the Inverness & District MCC by Mrs. Theresa Edgar, Derek’s widow – but who was Derek Edgar?

Derek was the younger son of Norman Edgar who was joint proprietor of Edinburgh motorcycle dealers, Edgar Brothers. His older brother is Norman F.W. Edgar, former Scottish Six Days Trial Clerk of Course and himself a three times Scottish Trials Champion, who has observed at the Highland Classic since 2015. His Sons, Stuart and Ross compete in the Highland Classic.

Derek left school and became an apprentice motorcycle mechanic under his Uncle, Frank Edgar in the family run business. He took up trials riding at 16 years of age and rode in several Scottish Six Days Trials, riding DMW, Bultaco, Puch, AJS (which he helped develop) and Honda machinery. He went on to work for Steyr-Daimler Puch at their Graz factory in Austria and then Montesa in the USA.